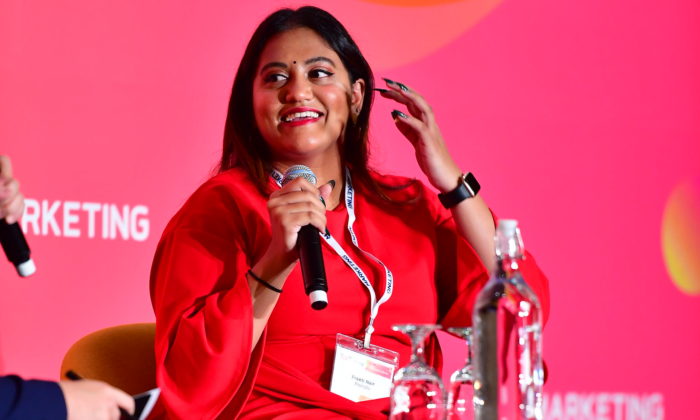 Social media star Preeti Nair, best known for her moniker “Preetipls” has evolved from being the humorous  “influencer” to a voice for social change and commentary in Singapore. She took local social by storm several years ago after calling out fashion influencer, Saffron Sharpe for hosting a “fashion police” program on Mediacorp’s Toggle. The show was eventually pulled from Toggle and led to Sharpe apologising for it on her Facebook account.

With her razor sharp wit, rap videos and unique take on parodies, Nair believes that with every piece of work she puts out there, she needs to get her voice heard. “Don’t say something for the sake of it. Say something when you have something to say,” she said, speaking at Marketing’s Content 360 conference.

Describing herself as the anti-influencer influencer, she explains that her voice is what she consistently strives to retain on every piece of work. Nair, who regularly updates her Facebook and YouTube accounts with parodies of social issues, is also known for creating rap videos for brands. Among the list of brands Nair has worked with include Singapore Tourism Board, Lazada, The Body Shop, Scoot, DBS, Circles.Life and most recently, the Singapore Bicentennial Office.

In a conversation with Marketing, Nair explains that since working with brands, she has had to grow her own team to four and her experiences with clients have been varied, but largely remain on the positive side.

“Very rarely do I have clients who come up to me and tell me I want you to do what 10 others also did. I usually avoid clients like that or I’ll say I will do it but in my own way in my style and somehow do it differently. I don’t want to be like the 10 others who did the same thing,” she said.

But there have been instances where a client has sent a mass email to everyone in the campaign and listed down names of all the influencers involved in the campaign in a generic email.

She also explained that while it is great to have clients who know what they want and can visualise it, it is equally exciting to have clients who don’t have a specific idea but are willing to work with you in a collaborative manner to create something and are open. But of course, education of the process is really important as well. More here.

Marketing: Where do you draw your inspiration from and how would you describe your style?

I think long and hard before uploading the videos/parodies I create. For example the first video I created addressed cyber bullying and I did a parody and paired it with an exaggerated, sarcastic version of myself and it suddenly went viral. Through humour I can address a lot of these issues that we should be talking about.

I speak on a lot of issues from cyber bullying to racial harmony, and I guess I have a lot of fun with it. And it is refreshing because I don’t just sit there and tell you this is not okay, I go super crazy and to extreme lengths in an exaggerated manner to get my point across. My inspiration has always been about the larger message behind.

It works because I am from a minority and it is true. It is because I live the life I have lived and the experiences I have had that I can talk about minority representation. I have personal experiences to share about and that is where my credibility comes from.

Marketing: Can you share your creative process when working with clients?

When I work with brands, it is about finding the balance with their key messages, their call to action, things I have to say and [my own voice]. I think on my end, it is always about how would Preetipls do it. It is kind of like stepping back and wondering what would this super exaggerated persona do and how would she market the product. Usually, the Preetipls character goes all out and says things that are super far fetched and ridiculous, so it is always about bringing a different perspective instead of the straightforward.

An example I have is with my clients “Super Smooth”. It is a laser hair removal company and when you are promoting a company like that, the usual way it is done is by either sharing your personal experiences or reviews or showing the product along with a push messaging on a promo code. That is always the same formula.

So what I did was I sat down and shot a whole interview of someone interviewing me of my experiences with Super Smooth in an exaggerated manner. Check it out:

Hi I’m Preetipls, Singapore TOP laser babe! Life hasn’t been the same since my first session at SuperSmooth. Watch now to hear my HONEST review on LASER HAIR REMOVAL @ SUPERSMOOTH.if you’re ready to get deforested, hit up Supersmooth with the code "Preeti10" for an extra 10% off trial sessions at Supersmooth (from NOW til the 14th of Nov). For more info head to – https://www.supersmooth.com.sg/

Posted by Preetipls on Wednesday, 7 November 2018

When I pitch my ideas to clients, I give my ideas and whatever the client is most interested in, they will let me know. And that is when I break it down into a full story board and I try to get as specific as I can. I usually try to explain clearly what I will be doing so I don’t film something they are not aware of. And that is how I try to avoid any issues. It is very clear what I want to do.

I will also always shoot what the client wants and was promised. But I will also create alternate versions of the video so clients have the option if they prefer my style of the video. But we communicate a lot with clients and always to give them a heads up and always keep them on the loop.

Marketing: You talk about sensitive topics. How do decide on what needs to be said?

For me it boils down to morals. I always think it is pretty much about how you are brought up. If you think something is offensive, it is because you are grew up the way to think it was not okay. For example, there was a video where people painted themselves brown and ran around Sentosa acting like migrant workers. I see content like that and that triggers me because that is 100% offensive and things like that are clearly over the line.

Another example is when an Indian lady was asked to live with a Chinese family for couple of days, for a local programme promoting racial harmony, and then asked to learn about different cultures. But it turned out to be really offensive because the video they put out showed the children saying things like “I don’t like Indians”. It is weird because those kids were probably still in primary school. They already have this whole assumption about a race and it boils down to upbringing. So I thought it was not okay and the fact that it was left in the final video for the whole country to see and the video was somehow trying to promote racial harmony was not okay for me.

So, I went full on with sarcasm. I brought a Chinese friend to live with me and I made my mum/brother say things such as “I don’t like Chinese” and I even asked him where he was staying and my friend said “Yew Tee” and I replied back saying “Oh I don’t know why you can’t speak to me in English?”

So it was really sarcastic and I was trying to show that is what the programme did.

Through humour and sarcasm, I tried to show that this happened to a real woman who went through this for three days while mine was just a joke. I do more than twice about putting something out there, I think so many times about it and think if anyone will be offended by it. But I know humour it is subjective, but sometimes if I alone think is funny, I will still put it out there.

If one person is impacted by my content, it is worth it.

Marketing: How do you avoid backlash for yourself and your client?

So far nothing of that sort with a backlash has happened. It is more of the usual hate comments, someone judging your appearances. I guess when you put yourself out there, these things happen so that doesn’t matter.

But with clients there are generally a lot of levels of approvals to go through [to safeguard the content].

Marketing:  Are clients warming up to the idea of using humour in content?

As of now, a lot of clients do feel that humour is the way to go. A lot of them are trying to put out funny content or work with comedians.

I have never had to convince a client that you have to use humour, because that is what they expect when they come to me.

Marketing: Do most clients already know what they want when they approach you?

I would say I experience this 30% of the time, which is not so bad but it also cool when they are open to suggestions. It is amazing when clients know what they want and you can work on a 48 hour timeline, and if you really have to, things can speed up like crazy. If they don’t know what they want, I think it is okay as long as they are open to suggestions especially when they work with different influencers and celebrities.

Marketing: Can you share a piece of work which you really enjoyed creating with a client who was clear in what they wanted?

So for Body Shop when they reached out to me they wrote a long email and at the end of the email it said “one rap video”. I remember I had a major freak out moment and I ran to my brother’s room and said “OMG Body Shop wants a rap”. To me, this was insane and I have seen Body Shop ads and they usually contain reviews and demonstrations and this new idea is so cool.

They gave me a brief and it was for their tea tree oil and we decided with a one-minute rap video. The video was just about me rapping about the tea tree oil. I was just trying rap for fun and it was really cool that they asked me to do it for their brand.

It is a very tricky decision making process. When I started out, I put everything on Facebook so my first viral video was on Facebook and now it is a place where it is more interactive with those who follow me. But actually pictures and parodies sometimes don’t work on Facebook unless it is something everyone has seen on their feed and it is your version of it.

I am sure you all would remember the Miss Universe dress, the Trump-Kim summit, it was something everyone was talking about and I was one of the first few to photoshop myself wearing a dress. It was just a picture, so that was faster consumed on Twitter, Facebook and Instagram.

Posted by Preetipls on Wednesday, 28 November 2018

And I guess for videos I am at the point where I am putting more music-centric stuff on YouTube as it has an international audience. Facebook is where the parodies go, anything for social cause, anything viral in Singapore. But YouTube is more for a music video, a parody of famous songs or interviews with artists/bands because that is where the international crowd is at.