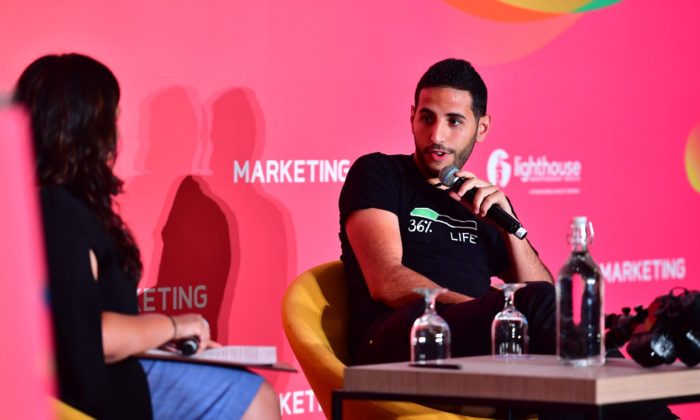 Since the news broke about Nas Daily moving to Singapore, founder Nuseir Yassin has been constantly, and consistently, making headlines. His first meet-and-greet over the long weekend at Botanic Gardens drew over 2000 fans in Singapore (and also sparked conversations on social and media platforms over permits needed in Singapore for large gathering).

Popularly known for his positive feel good videos, Yassin explains that while his short films are what he is famously known for, he spends a significant amount of time creating longer form videos, talking about both positive and sensitive topics. While Yassin spotlights different countries in his videos, he describes the company as more than a travel vlog and spreads awareness about social issues, hidden gems, and unique cultures around the globe. Today, Yassin’s knack for content has amassed 12 million followers on Facebook to date.

“I grew up as a middle child and a second class citizen in my country. I never had attention and never had anybody to care about what I had to say. Growing up in self doubt is a good thing it makes me say what I want to say really really fast because I know people don’t have time for me. I don’t deserve a minute of their time and people also have really short attention span.” he explains.

“Initially, I wanted to just go on Facebook where all my friends are and just produce whatever I care about. And, I never prank, never sexualise and never make stupid content. And it works. I think Facebook changed its algorithm to value meaningful social interactions,” he added.

When asked why he banks only on Facebook, he said, “I have moral and practical reasons why I only chose Facebook. On YouTube, there are pranks, women on thumbnails, rich people posing with cars which get clicks. I think [these kind of content are] terrible for kids and it is terrible for the society. They have negative value, in fact and I don’t want to be part of that system.I don’t think YouTube is doing enough to stop that.”

Here’s more from his interview in the hot seat at Marketing’s Content 360 conference today.

Marketing: Where do you draw inspiration from?

It’s easy. It’s anything I care about. I’ve got no obligation to cover anything in the world. If I care about one topic, then I’m going to make the video. I care a lot about issues in Israel so I make a ton of videos.

Marketing: What tip do you have for marketers on gaining followers and amplifying content?

For example, I can make a video about why I quit partying, but who cares about why I don’t go to clubs anymore? You have to make videos in a way that make people say, “I also quit partying for the same reason.”

The more relatable it gets, the more shares you get.

I didn’t try to copy others and be crazier because that would be inauthentic. Copies never work. Back when I started on Facebook, people were saying it’s stupid to not put the videos on YouTube because I’m not getting any money on Facebook. Being early on the platform is one way to move forward.

After you hit the 10,000 mark, it’s your responsibility whether you fail or succeed. If you have one video that’s good, it will go extremely viral if the first 10,000 likes it.

The second tip is to make content that no one will ever make. Issues such as shipping and incineration plants (two topics Yassin is currently thinking of exploring).

Thirdly, you have to follow the Facebook algorithms like it’s the new Singaporean law. Whatever Facebook prefers, you should be. As of a month ago, Facebook started hating on one minute videos. It pains me to say that. I wanted to cry! But now I’ve shifted my strategy and am making three minutes and above. You get more exposure on Facebook, you get to explain more in depth, and that also gets seen more.

Marketing: How do you find that balance of being funny, educational, and sometimes sensational?

Always sensational. I think the point of Nas Daily videos is to give you a spark and to tell you something interesting. You watch the one minute video and you can go to Google and Wikipedia to know about the issue, and become an expert. It is never my intention to make a 45 minute documentary, or at least not yet.

With all the negative press and news out there, it blows my mind why Nas Daily is successful. I never manufacture drama like most content creators do, including the media. It’s hard to be noticed when you are being positive, when you are not making people angry. I think a lot of people realise that I’m genuine.

Marketing: What do you think of haters online?

If you look at the grand scheme of things, if you have 100,000 people that say yes to you and 1000 that say no, that’s a 99% approval rate. That’s better than any president in the world! This whole focus on the tiny things can be irritating because 90% of people that watch Nas Daily like it. I know that there’s 10% who are mixed and that’s great, but it’s nowhere near as bad as people think it is.

[All these articles criticising] are literally free publicity. At the end of the day I think people are going to be on the web watching Nas Daily and make up their own minds. That’s the final verdict.

Marketing: You gave up your role at a mobile payments company to get into this role. How did you convince your family about your choice?

With anything digital, the first reaction people have is “It’s stupid”. When Snapchat came out, people said it’s stupid. When Instagram emerged, people said it’s stupid and now it’s insanely huge. When I told my parents and say that I’m giving up a US$120,000 a year job in New York, it was a problem. Because initially when I was making one minute videos on Facebook, I was losing money. I was paying money to make these videos.